Throughout my life, I was told that I had a heart murmur; this had always been a part of my life. Every medical provider who has listened to my heart has commented on it. It wasn’t until about a decade ago that I finally found out that I have a Bicuspid Aortic Valve. I am in good company – Arnold Schwarzenegger was born with a bicuspid aortic valve.

Most people have a tricuspid valve. This means that normal aortic valves have three tissue leaflets. In the simplest terms, a bicuspid aortic valve can be a serious heart valve disorder in which the valve only has two leaflets, or flaps, that control blood flow through the heart.  Interestingly, bicuspid valves are one of the most common forms of heart valve disease. According to reports (and my new cardiologist), this congenital variation occurs in 1% to 2% of the general population. Like other congenital issues, bicuspid aortic valves are formed during pregnancy when two aortic leaflets fuse together. 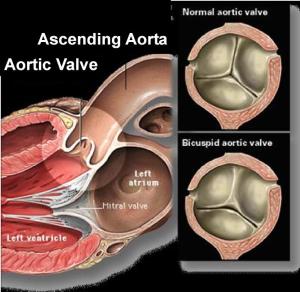 This variation in the development of the valve can lead to serious medical problems. However, that is not always the case. I have had several medical tests recently (more coming) and am pleased to know that calcification (which I understand as stiffening) and leakage are not occurring in my heart. In fact, according to my cardiologist (that sounds unbelievably weird to me – my cardiologist) my heart sounds pretty good.

Now for the frustrating part…my cardiologist also says that this variation in heart valve structure puts me at risk for a variety of problems. Because of this, she has cautioned against high intensity interval training (HIIT) which had become my new favorite cardio workout. She also asked that I consider not taking my weight lifting to extremes. Evidently both activities cause spikes in blood pressure and that puts undue strain on my heart. Now you may have already put two and two together and have begun to ask…what about Arnold? Yes, he did, and as far as I know does, still lift weights…heavy weights. However, he has also had at least one surgery – valve replacement. That is not one of my many life goals!

However, of course there had to be a however, there  may be another problem. The word aneurysm is pretty scary. I have been told that I may have two. One is evidently to be expected. It is at the root of the aorta. According to Cedars-Sinai website, “There can be significant variation in the way individuals are affected. However, the aortic root and ascending aorta are the aortic segments most commonly involved, and they are generally larger when compared to those in similar patients with normal trileaflet aortic valves.” So, the root of my aorta is enlarged. The more troubling issue is that there is suspicion that I have a thoracic aneurysm of greater than 5 cm. According to Cedars-Sinai, “When a weak area of your thoracic aorta expands or bulges, it is called a thoracic aortic aneurysm (TAA). Approximately 25 percent of aortic aneurysms occur in the chest and the rest occur in the abdomen. Thoracic aneurysms affect approximately 15,000 people in the United States each year.” If tests performed to this point are accurate, my second aneurysm is suspected to be in my chest. What does that mean? Good question.

In about two weeks I am having another CT scan and a Trans-Esophageal  Echocardiogram (TEE). Again, from Cedars-Sinai, “In transesophageal echocardiography, a long, flexible tube (a probe) about the width of a little finger is inserted into your mouth and esophagus. (The esophagus is the muscular tube that connects the throat to the stomach.) A tiny transducer at the tip of the probe sends and records the sound waves. With transesophageal echocardiography, the sound waves that echo back pictures of your heart come from inside your esophagus rather than through your chest wall. These images are sometimes clearer than those produced by a regular echocardiogram. The probe is closer to the heart, where some structures are better visualized. The sound waves that echo back from striking the surfaces of the heart are turned into images that can be seen on a television screen and recorded on videotape and CD.”

I suppose there will either be great news, so-so news, or bad news. The worst outcome would be surgery. I would be lying to you (and to me) if I said that I was not feeling scared. I am and I will adjust to whatever comes my way just as I have all of my life.

22 thoughts on “Bicuspid Aortic Valves, Arnold Schwarzenegger, Aneurysms, and Me”

© Dnoelle and The EnLightened Journey, 2012-2015. Unauthorized use and/or duplication of this material without express and written permission from this blog’s author and/or owner is strictly prohibited. Excerpts and links may be used, provided that full and clear credit is given to dnoelle, Dawn N. Riggs, Ph.D, and/or The EnLightened Journey with appropriate and specific direction to the original content.
La Isla Oeste

Meditations on the Nature of Life

Athletics, Motherhood and Other SuperFantastic Subjects