I cannot remember whether I have posted before and after pictures here. So, I apologize if you have already seen these. While I have been larger than this (with an all time high of 235), this is a pretty good representation of what I looked like for most of my adult life (except that I have been happier since 2000 than I was prior to that time). 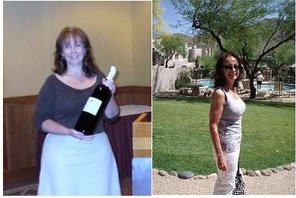 What I wasn’t experiencing in 2007 was power surges, personal summers, internal space heating…a.k.a. hot flashes. I had a few prior to my surgery, but since then…ugh! Thankfully they are usually brief. But you have not lived until you have awakened with sweat dripping from your chest onto your arm. And what purpose do these actually serve? I think that if I must have hot flashes, they ought to be accompanied by intense periods of calorie burn!

Are green beans really that expensive? We went out for dinner with a large group last night and I decided to order tilapia. However, it was served with rice, sauce, and green beans. I asked them to put the sauce on the side, hold the rice, and add more veggies. What I got was a lot of cooked carrots, a few red bell pepper strips, and about 6 green beans. Really? Six? This had looked like one of the healthiest entrees. As it turns out, the fish was not only “lightly seasoned” it was also lightly fried. The veggies appeared to have been cooked in butter or oil. And the sauces were full of sugar, sodium, and fat. All this for just under $15. So today, I am bloated from the sodium and other unknown ingredients. When will restaurants get on board with the changing needs of Americans? In a society that is growing larger (both in numbers and in size), there is a need for ALL restaurants to offer tasty, healthy food. I am not calling for them to stop serving the other foods layered in fat, sodium, and sugar; I am just asking them to add some healthy fare for those of us who don’t want to return to our larger selves.

While I am chatty and opinionated on paper and via computer, I am an introvert. This means different things for different people. For a very well written discussion, see Susan Cain’s “Quiet: The Power of Introverts in a World That Can’t Stop Talking”. For me, introversion has many layers. It means that I rarely make snap decisions – instead, I incubate. It may appear that I have suddenly decided to do something; however, it is always the result of long thought and consideration along with a healthy dose of intuition. It means I HATE public speaking. It also means that I don’t like a lot of commotion and noise and that I am more likely to be talkative in small groups (3-4) than in groups larger than 4. This was quite evident last night. As I mentioned, we went out with a large group last night. We arrived early and I was relatively talkative with the two other people who also arrived early. As the rest of the group trickled in, I talked less and less. Someone actually mentioned my tendency to be quiet and I told them that I used up all of my words before their arrival. I was joking, sort of.

My commute is about an hour each way to and from work. When I took this job in 2007, I promised myself that I would always notice something new on my drive. I have continued that to this day. I have seen fields of sheep (and lambs), hawks, eagles, rainbows (single, double, triple), beautiful cloud patterns, fires, etc. Today I was reminded of the elevation at which I live. The clouds are very low today. They are so low that some actually just hang there, below the mountains. When I am reminded of this, it always brings a sense of awe. Nature is such an amazing experience.

So, what do weight loss pictures, hot flashes, green beans, introversion, and clouds have to do with one another. Who knows! What I do know is that it is Friday Eve and sometimes by this time in the week, I get a bit punchy.

What’s on your mind today?

© Dnoelle and The EnLightened Journey, 2012-2015. Unauthorized use and/or duplication of this material without express and written permission from this blog’s author and/or owner is strictly prohibited. Excerpts and links may be used, provided that full and clear credit is given to dnoelle, Dawn N. Riggs, Ph.D, and/or The EnLightened Journey with appropriate and specific direction to the original content.
La Isla Oeste

Meditations On The Feminine Self

Athletics, Motherhood and Other SuperFantastic Subjects